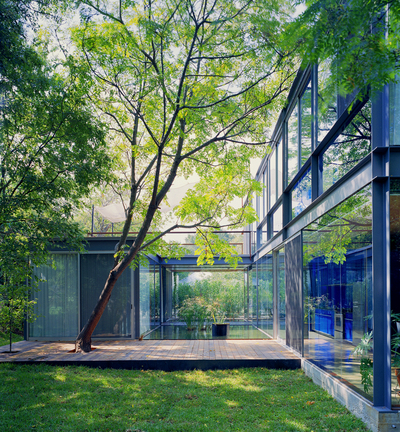 The house was built for two families in Austin and therefore is split into two living areas. The house consists of two pavilions connected by a glass hallway.


The design was greatly influenced by different regions and cultures. Both the use of the roof as an outdoor living space and the shading devices are derived from Moorish architecture. The body of water and the spatial continuity between inside and outside was inspired by Asian architecture. while the structural transparency of the volumes and the minimalist aspect of the interior was derived from Japanese pavilions.


The house is constructed of a modular steel frame. The frame is infilled with prefab thermasteel panels to minimize construction on-site waste. The structural frame is exposed, showing the construction process and articulating the house’s facades. The repetitive modular method, as well as the prefabrication allowed for greater efficiency during construction.