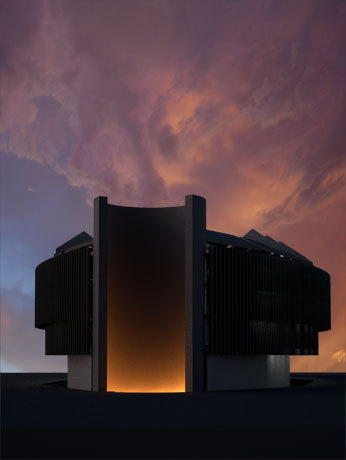 On the 14th of August 1980, at the outset of the shipyard strike, an attempt was made to isolate the citizens of Gdansk from their fellow countrymen; phone lines were cut, mail was censored, televisions and newspapers went about business as usual. Remarkably, despite the censorship efforts, the population sensed the urgency and magnitude of the situation. They communicated without speaking, felt each other without touching, and listened without hearing and ultimately, the strikes spread throughout the country. The success of the movement can be traced, not to a violent show of force, but rather, to a quiet show of unity.


Through light and transparency, our design seeks to register this aspect of the Solidarity movement of sensing the presence of others without direct contact. The existing Solidarity Square Monument is veiled by 21 poplar trees, each representing one the points of the Gdansk Accord. The building form incorporates the circular geometry established by the monument without being consumed by it, acknowledging the past while looking to the future.


A cloister surrounds a winter garden which takes the shape of a central courtyard. Symbolic of energy, life and renewal this concept can be found in nature in the form of a tree growing out the stump of one previous. The garden is meant to be a counterpoint to the monastic, tranquil settings of the exhibit space. It’s our endeavor to capture both the melancholic, sad moments in addition to the moments of inspiration and exhalation. This duality, reflective of Poland at the time of the shipyard strike, is paramount to our design. The country was unified as it never had been before or since. Yet, this unity came at the expense of extreme economic crisis, lack of food, low wages and high inflation. The ESC should tell the entire story of Solidarity not simply the results of the toil.