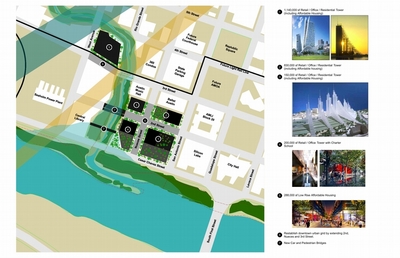 
The two spires, tapering back in deference to Shoal Creek and Town Lake, will appear like two natural peaks rising in concert with the enchanting Texas Hill Country. Approaching River City Green along the hike and bike trail, one will observe a ribbon of native plants and Oak, Maple, and Pine trees swaying on tiered balconies. Together they form an extension of the park as they rise into the sky and change with the seasons. A great room will be in the pinnacle of the highest pillar as an observation solarium. The solarium will act as a sky garden, similar to Mt. Bonnell lookout, and be accessible to everyone who lives in and visits our beautiful green city.


It is proposed that the elevator system generates power as it glides between levels. An intelligent double skin system which moderates the harsh sun, while allowing for better cross ventilation and minimal heating and cooling. We will draw from Foster and Partners’ pioneering design to inspire new paradigms. Designs such as their LEED certified Gold Hearst building in New York City which reduced the amount of steel needed by 20%.