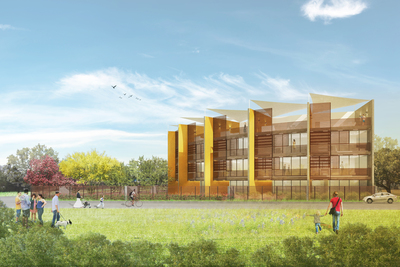 The Roosevelt townhouses are composed of seven radiating units, each four stories tall with individual rooftop terraces that face downtown San Antonio. The townhouses are organized in a fan configuration to maximize views while enforcing privacy between units. Further maintaining privacy is a massive concrete tilt-up wall that extends to the front yard, reinforcing the radial nature of the design.


As one drives down Roosevelt, the highly reflective brass panels on one side of the wall creates an interesting visual effect continuously altering one’s perspective of the building. Finally, the core of the floor plan opens up to the sky with a light-well bringing natural light deep within the unit, a design philosophy often implemented in densely urban cities such as Paris and Barcelona.